This week’s newsletter describes fidelity bonds for JoinMarket-style decentralized coinjoin, mentions a PR for BIP322 signmessage support (including the ability to sign for bech32 addresses), and summarizes a discussion about bloom filters. Also included are our regular sections about bech32 sending support, popular Q&A from the Bitcoin Stack Exchange, and notable changes to popular Bitcoin infrastructure projects.

Week 20 of 24 in a series about allowing the people you pay to access all of segwit’s benefits.

In percentage terms, the number of native segwit outputs—payments to bech32 addresses—has slightly declined over the past year (~50,000 blocks). The obvious explanation would be that people tried bech32 addresses, didn’t like them, and went back to using legacy addresses or P2SH-wrapped segwit addresses. If that’s the case, should we give up on bech32 addresses?

Note: all charts in this section use a simple moving average over 10,000 blocks.

Perhaps first we should investigate whether there’s an alternative explanation. Percentages are synthetic results—information derived from combining multiple other sources—so the first thing to look at is the raw data. The graph below shows the total number of outputs paid to various types of scripts over the past two years: 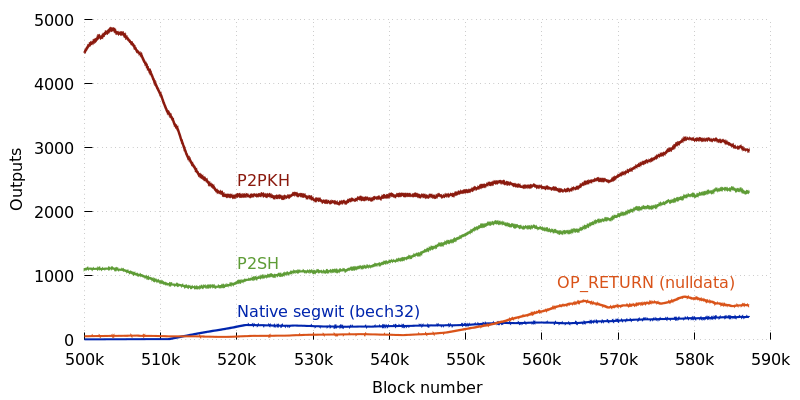 Contrary to the percentage data, we see the number of P2WPKH outputs slowly (but steadily) increasing. What we also see is that the number of other outputs is also increasing. This may become more clear if we stack the totals: 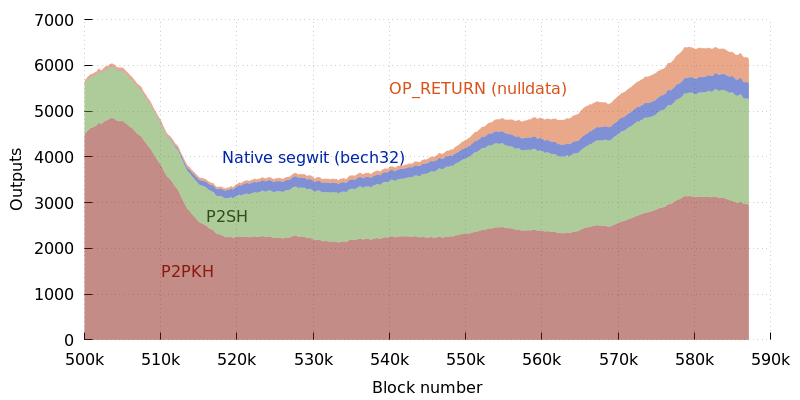 Now we can see that the average number of outputs is slightly higher today than it was at the previous peak of Bitcoin activity during late 2017 and early 2018. That makes sense—the more transactions that use segwit, the more block space there is available for other transactions. However, despite the overall increase, there are slightly fewer payment outputs (P2PKH, P2SH, and native segwit). The remaining outputs constitute a significant increase in the number of OP_RETURN (nulldata) scripts.

This growth in the overall number of outputs and the number of nulldata outputs explains why the percentage of bech32 outputs has been declining despite the absolute number increasing. It means that we shouldn’t give up on bech32. Indeed, the recent spike in overall outputs (and other recent data available elsewhere) may be a sign of upcoming feerate increases that will encourage more users and organizations to cut costs by switching to bech32.

Bitcoin Stack Exchange is one of the first places Optech contributors look for answers to their questions—or when we have a few spare moments of time to help curious or confused users. In this monthly feature, we highlight some of the top voted questions and answers made since our last update.